We are the proud tenants and custodians of a truly extraordinary landmark building. As such, we think of our rich heritage in terms of both the 200-year lifespan of Islington Mill itself, and of our own 25-year residency (and counting). Thanks to the National Lottery Heritage Fund we are now in a position to explore, understand and showcase the extraordinary history of Islington Mill like never before.

Though the mill is our main and central building, to the public ‘Islington Mill’ commonly refers to the entire collection of nineteenth and early twentieth century buildings that reside on our site, and also to Islington Mill Arts Club – that’s us!

A Brief History
of Time

As part of our efforts to preserve and document our building we engaged the brilliant team at Salford Archaeology who recorded the mill using 3D laser scanners.

“A seven storey mill, twelve bays long, internal beam engine house with upright drive shaft to each floor. On the south side a water tower and extension have been added. An early fire-proof mill constructed in 1823 by the building firm of David Bellhouse, responsible for a number of Manchester’s early mills. Near the terminus of the Manchester, Bolton and Bury Canal. Built as a room-and-power mill, which was tenanted to persons involved in cotton spinning.”

– R. McNeil and M. Nevell (2000), A Guide to the Industrial Archaeology of Manchester 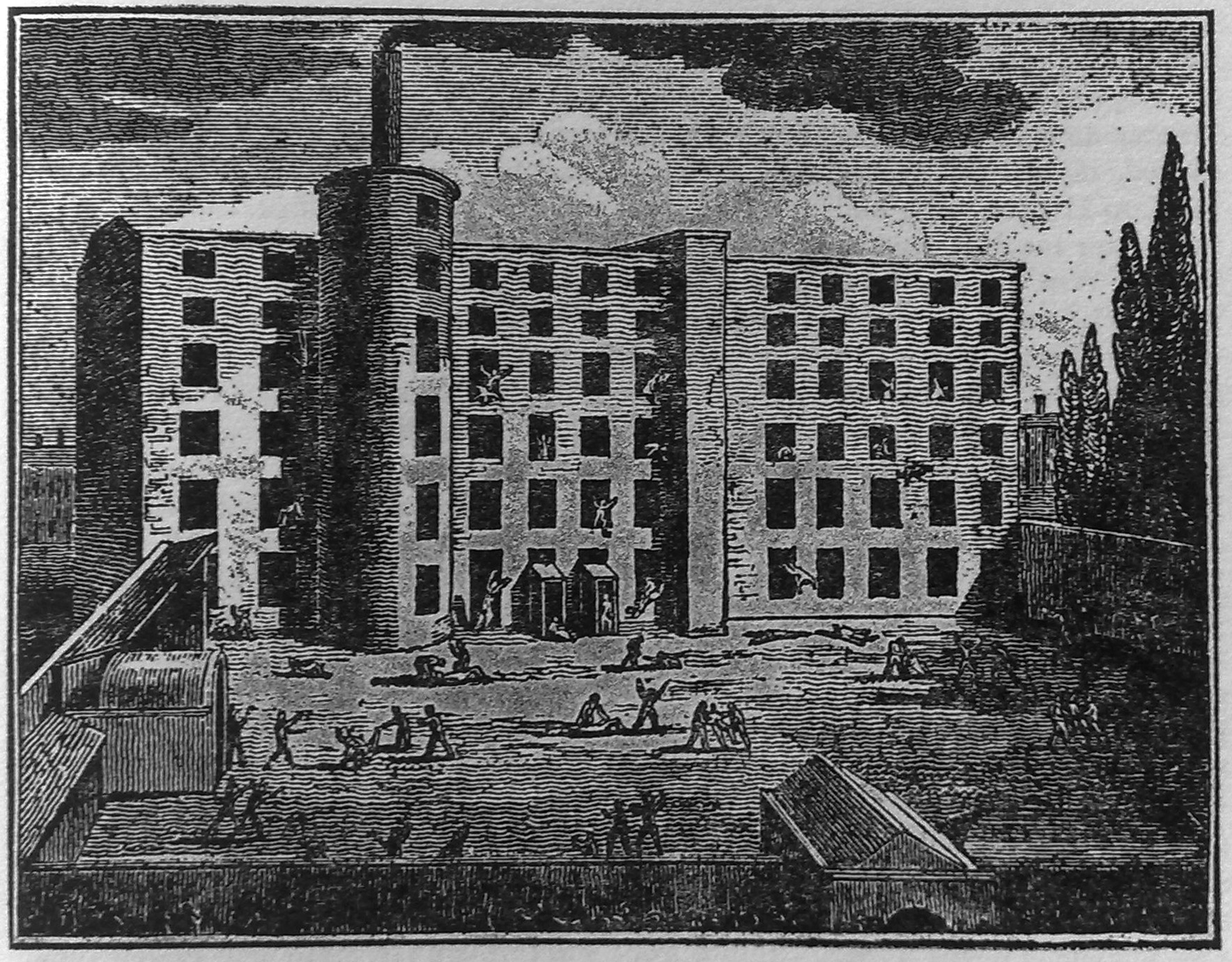 Islington Mill was originally built for cotton spinning in 1823 by the self-taught Leeds-born architect David Bellhouse (1764–1840) for Nathan Gough. Bellhouse’s firm was also responsible for the construction of the Manchester Portico Library, of which Bellhouse was also a founding member, and the original Manchester Town Hall which resided on King Street, designed by Francis Goodwin, and later demolished.

Just one year after Islington Mill was built there was a structural collapse of the building when a supporting cast iron beam broke. The floors of the building partially collapsed, one into the other, trapping workers amidst “bricks, slate and fragments of machinery”. People leapt from windows to escape. Nineteen people were tragically crushed to death. Three of those were boys, the youngest aged 11, the rest were all young women and girls who made up the bulk of the mill’s workforce.

Witnesses in the area reported:
“A cloud of dust which obscured the air” amidst intense pandemonium and distress. One body, that of sixty-year-old Betty Smith, was recovered from the roof of the Engine House. 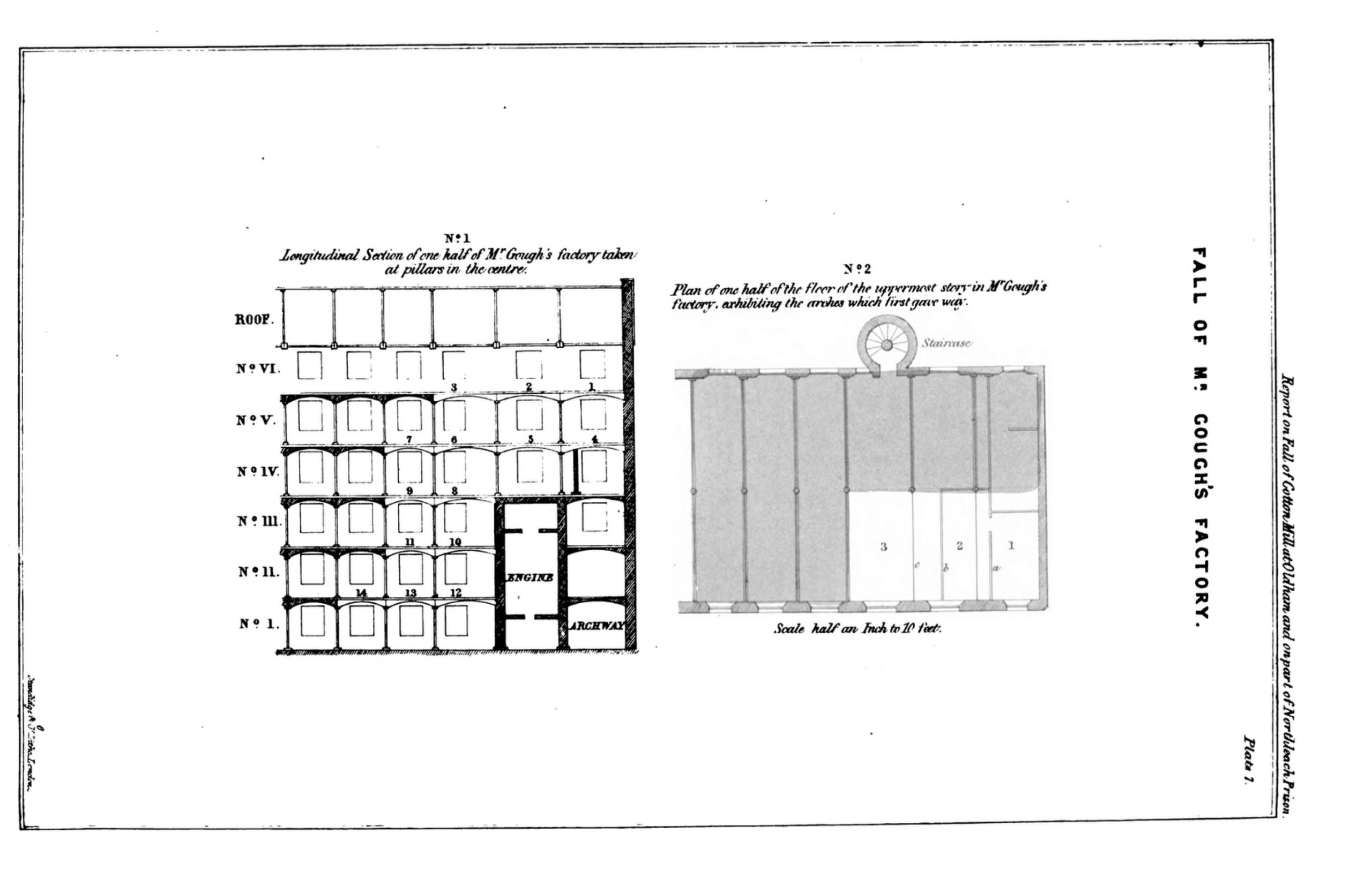 An 1845 Parliamentary paper, which can be viewed above, addressed the collapse of the building and featured an architectural drawing and extracts from the original Manchester Guardian coverage of the incident.

You can view a contemporary report of the collapse from The Portfolio of Entertaining and Instructive Varieties at this link.

“Of the killed, sixteen were females, and three boys. The sufferers were principally young women, from 12 to 20 years of age; but there were three married women, and one of them in an advanced state of pregnancy.”

Over the years, artists and tenants of Islington Mill have often chosen to remember and reflect upon this tragedy. This commemorative board appeared in our building foyer in 2016 and was produced by Jo Smartie who worked as front of house and on the door for our nightclub.

The mill’s original structure had consisted of a single row of cast-iron columns. During the rebuilding, additional rows of support columns were added for structural strength.

The re-opened mill was in use for cotton spinning and later for doubling. 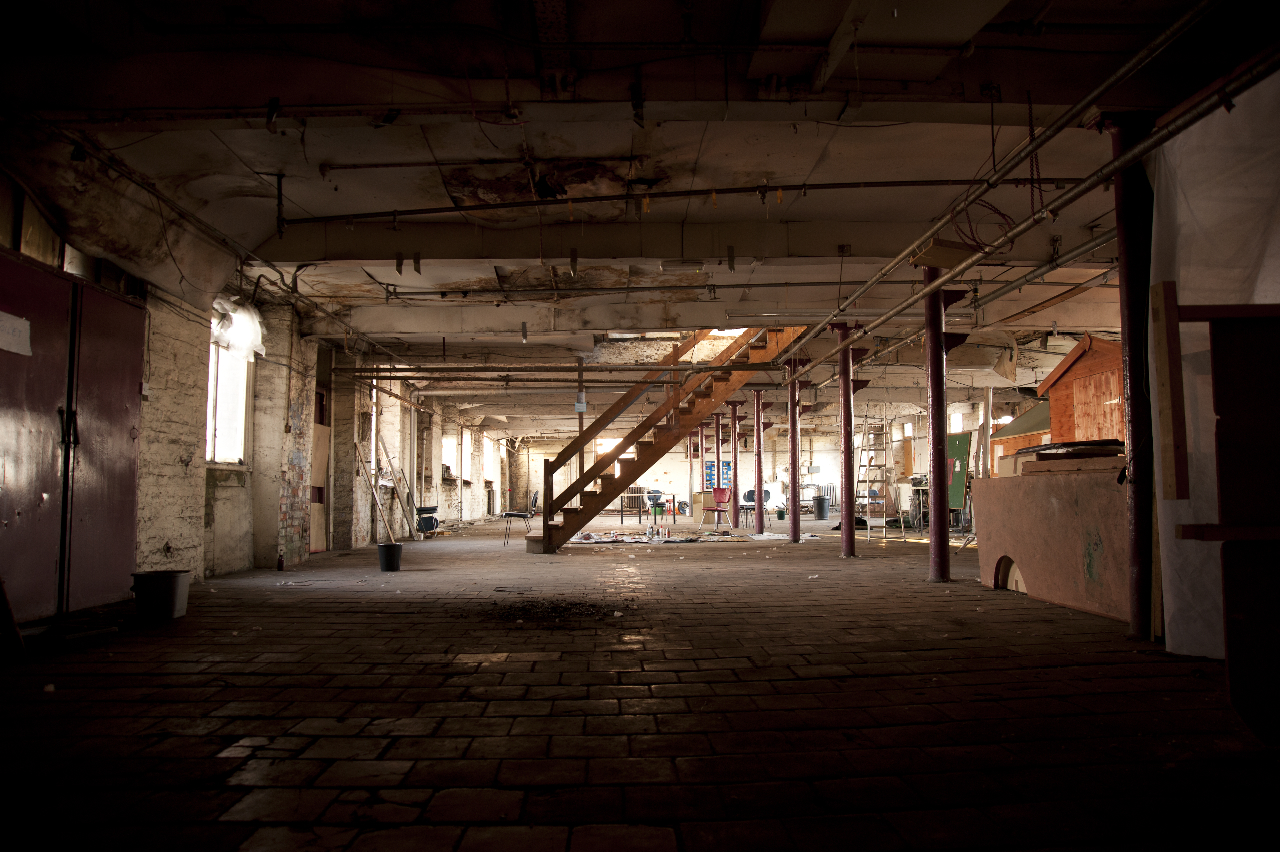 The new structure is said to have influenced the design of subsequent mill buildings and there is also an oft-quoted rumour that the architectural structure of the mills of the North West inspired the budding skyscraper builders of Manhattan. We are digging for evidence of this.

It seems that throughout the 1830s at least the mill was known as “Gough’s cotton mill” and is listed as Nathan Gough’s address in a contemporary advertisement.

Meanwhile the area of Salford in which the mill stood was a truly dismal example of Victorian industrial poverty. In his landmark work The Condition of the Working Class in England in 1844, Friedrich Engels described our Salford neighbourhood as follows:

“…cleanliness and comfort are impossible… [A] mass of courts and alleys are to be found in the worst possible state [and] vie with the dwellings of the Old Town in filth and overcrowding.” 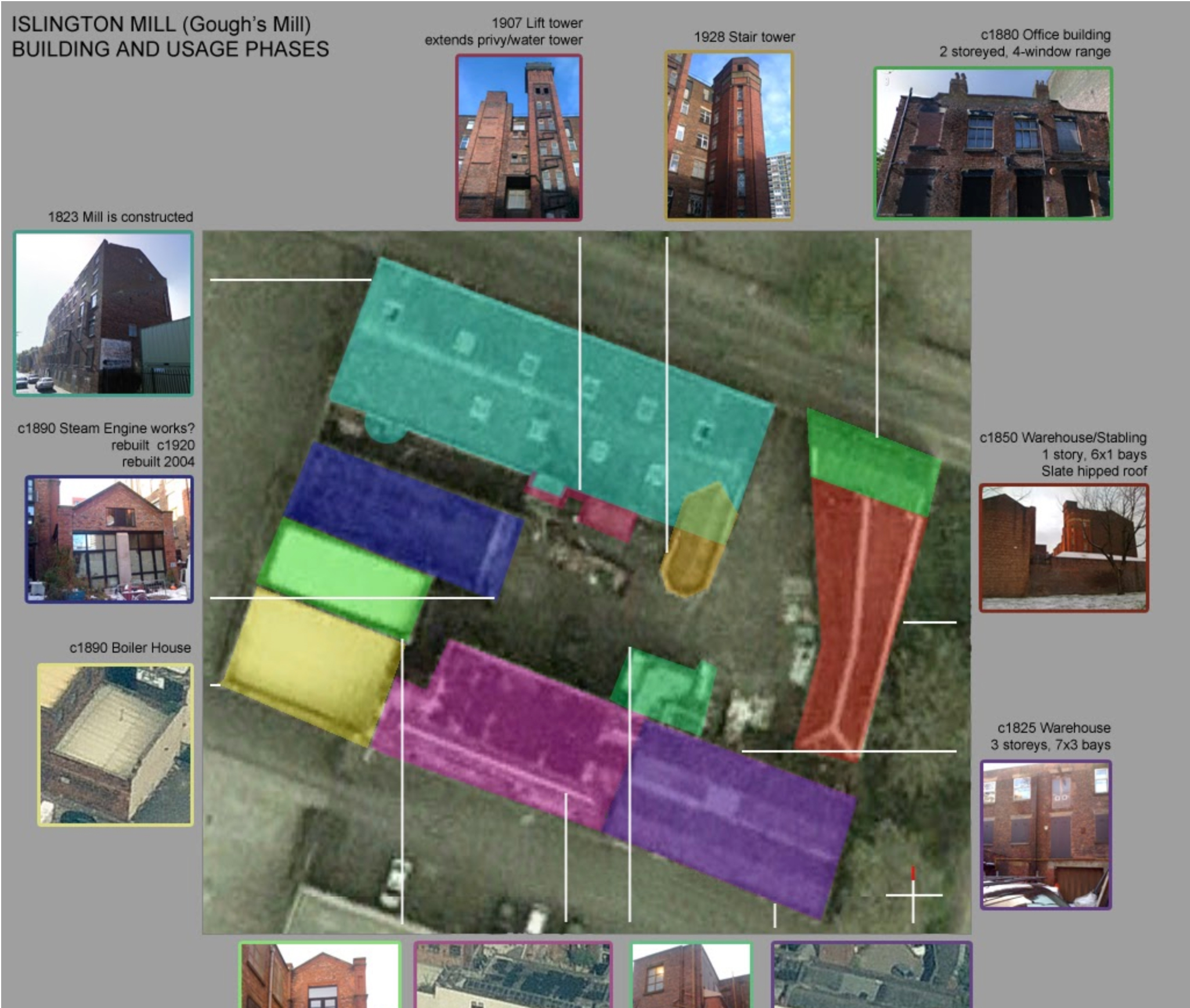 Further extensions to the Islington Mill site were subsequently added over the years, including a second mill by 1830 occupying the west part of the site (still extant and now known as New Islington Mill), stables on the courtyard, a lift, a warehouse, and the external engine house to replace the original internal one.

In 1853 the Morning Chronicle reported on a festive party held by William Morris at his establishment Islington Mill. Over 400 people attended and it was decorated in a “rough and ready” manner with the beams supporting the roof “hidden by laurel and holly and bay” and “bright coloured tissue paper cut into fringe”. The majority of the party attendees were young women.

“We noticed a few silk dresses, but scarcely any of the staple fabric of the county; the majority had got their exterior habiliments from the other side of Blackson’s edge. Mohair, alpaca, and wool was substituted for New Orleans and affuitive material. These dresses showed off the forms of the wearers to the best advantage; tastefully but neatly made, they were made more agreeable to the eye by nice habit shirts or pretty little collars of pure white turned down about the throat, and confined by a ribbon and a sparkling brooch” 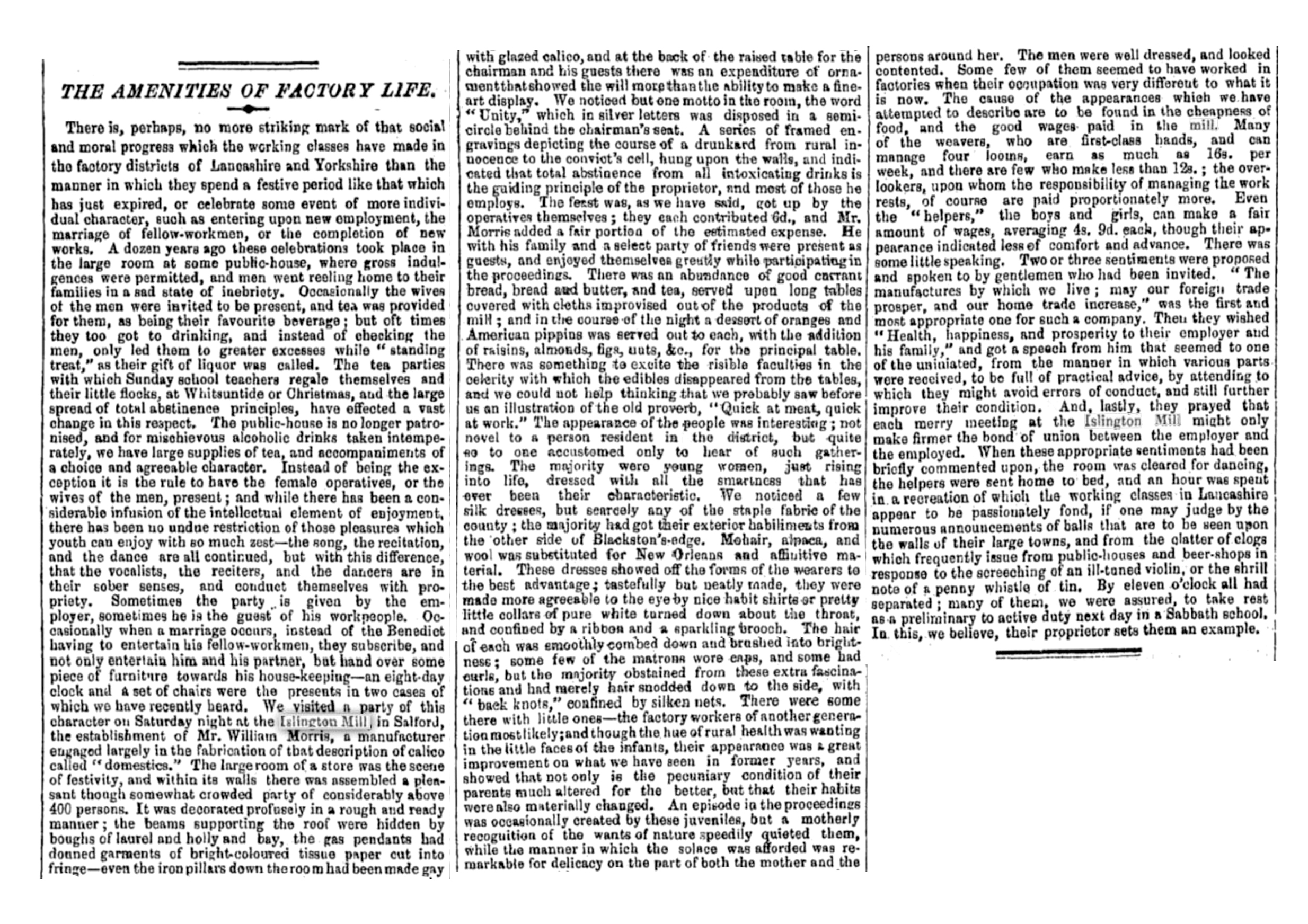 Two moments of important change for the Mill occurred in 1996. Firstly, the building was listed by English Heritage as a Grade II structure and was now subject to special protections. (Our building ID number is 471566 if you’d like to look us up).

Secondly, Bill Campbell, a young gay artist living in an adjacent tower block, noticed a ‘TO LET’ sign appear at the old mill across the way. Recently returned to Greater Manchester after studying fashion at Central St Martin’s, Bill rented the fourth floor of Islington Mill to use as his studio.

At this point much of the mill building, particularly the abandoned upper storeys, had been out of use since the 1960s. Bill soon began to share his new space with other artists and the first DIY art happenings (and parties) began to take place. In 1997, just nine months after Bill’s arrival, Islington Mill was put up for sale

2005 was the first incarnation of Sounds From The Other City. This festival celebrates the work of independent promoters in Salford and Manchester and draws attention to the beauty of Salford, the often overlooked ‘other city’ to Manchester. Every year since 2005 it has filled the streets and venues of Salford by embedding live music and art everywhere, from the doctors surgery to churches, pubs and community centres. 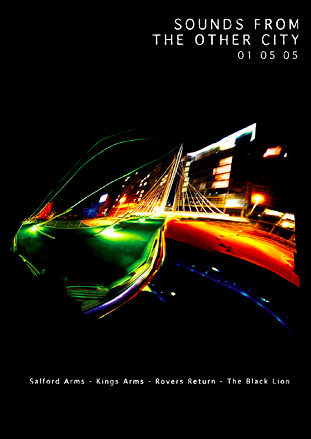 Islington Mill Art Academy (IMAA) was started in 2007 by Maurice Carlin. It is our free peer-led art school. It is open to anyone who wants to be an artist. Learning activity (workshops, crits, coaching, group residencies and projects) is shared and led by the energy and ideas of the current student-members. The Academy is not formally accredited; students choose to graduate when they feel ready to work more independently as artists. 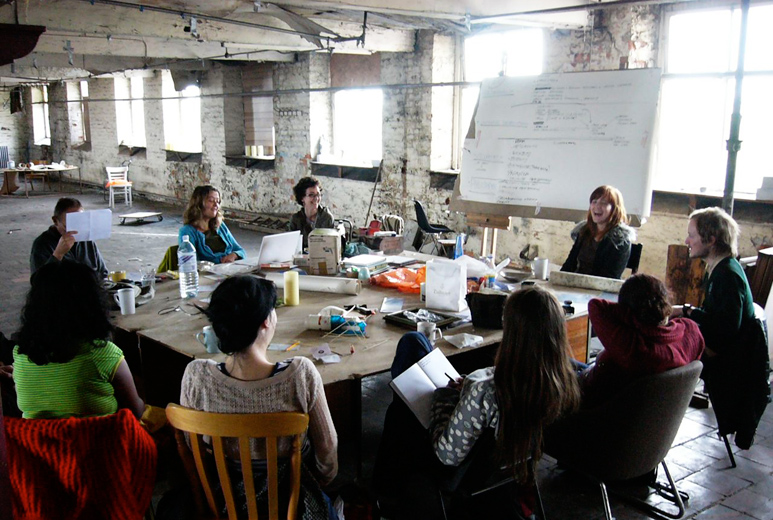 In January 2020 the National Lottery Heritage Fund announced that our funding bid was successful and that £746,000 was to be awarded to Islington Mill to complete our capital fundraising project of over £2 million.

This generous award from the National Lottery Heritage Fund allows for our building programme to commence. That means a new roof, complete weather-proofing of our structure, new entranceways, exterior lift to all floors, a fifth storey walkway, and new live/work/event spaces in a complete transformation of the 5th and 6th floors.

Most importantly of all it means our tenancy of this magnificent building is secured and there will be artists at Islington Mill for hundreds of years to come because of what we all did together in these years.