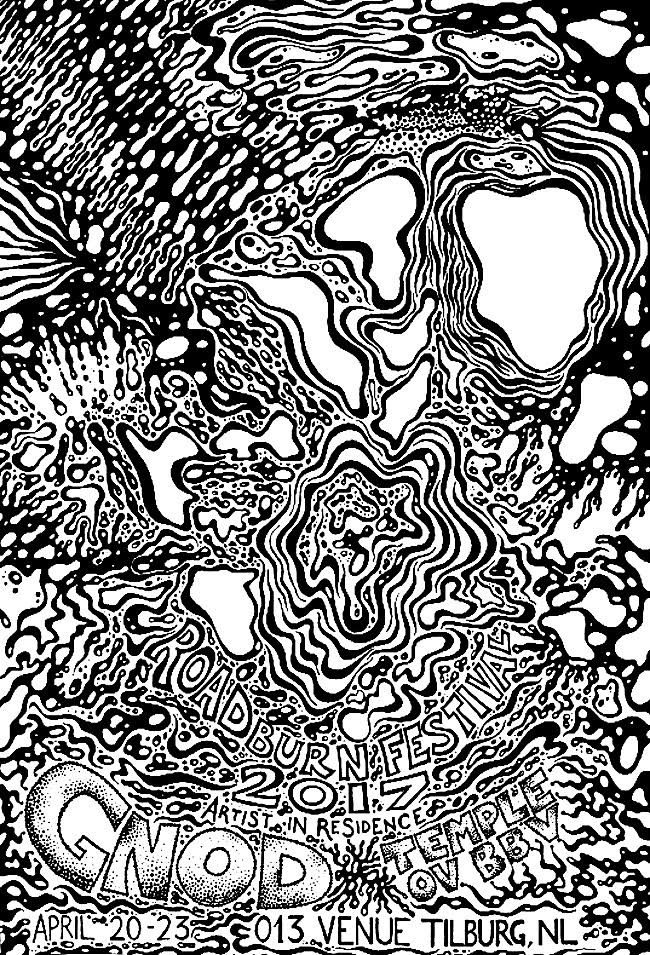 Drawing a direct line from angular punk to heavy motorik, and from noisy techno vibrations to tripped out near-ambient, tribal rituals, the UK’s psych renegades GNOD will return to Roadburn – their spiritual home overseas – and celebrate their tenth anniversary as Artist In Residence at the 2017 festival, set for April 20 – 23 at the 013 venue in Tilburg, The Netherlands.

Fuelled by maverick spirit and fearsome willpower, GNOD have released dozens of full-length albums, CD-Rs, cassettes and short run releases, each seemingly materialising from the ether, as the band, revolving around key members Chris Haslam and Paddy Shine, is shrouded in mystery.

Always thought-provoking and political oppressive, with a mercurial power and fiery intensity that could come from no-one else, GNOD will play four shows during their residency at Roadburn, and following in the footsteps of Circle, Justin K Broadrick and The Heads among others. Paddy Shine commented:

“Gnod live at Roadburn at Het Patronaat in 2012 is definitely one of the biggest highlights of our ten years of constant flux. To be invited back at all is a big big deal for us; to be invited back as ‘Artist in Residence’ in 2017, on what will be the tenth anniversary of the birth of Gnod, is an absolute honour. Gnod Bless.”

The first will see the DIY collective firing out slabs of towering, acidic invective and nihilistic electronics, while enticing our bodies to lose control to the propulsive, repetitive beats at the very same time. Their second appearance will aim to fog our brains and eyeballs with a wash of hallucinations, turning Roadburn into a gigantic trippy, otherworldly, and occasionally beautiful mess. On Saturday, April 22, GNOD will go in unexpected directions, joined by other musicians willing to abandon their safety net and walk the high wire, reafirming the band’s eclecticism, and shifting sonic pallete during their career to date.

The final chapter of GNOD‘s residency will culminate in a collaborative performance with Holland‘s own Radar Men From The Moon, known as Temple ov BBV, and which can be interpreted as a stream of materialised thoughts, giving the opportunity to listen, view and contemplate both band’s material in ever changing ways. Prior to their first sonic ritual at Eindhoven‘s 2016 Psychlab, they recorded an album, which hopefully will see the light of day at Roadburn 2017 – it would be a fitting testament to GNOD‘s tenth anniversary celebrations at this year’s festival.

In related news, Chris Haslam will exhibit his artwork at the 013 venue as part of GNOD‘s residency.

Roadburn Festival 2017 will take place April 20-23 at the 013 venue, Tilburg, The Netherlands. Tickets will be on sale fromOctober 20.”