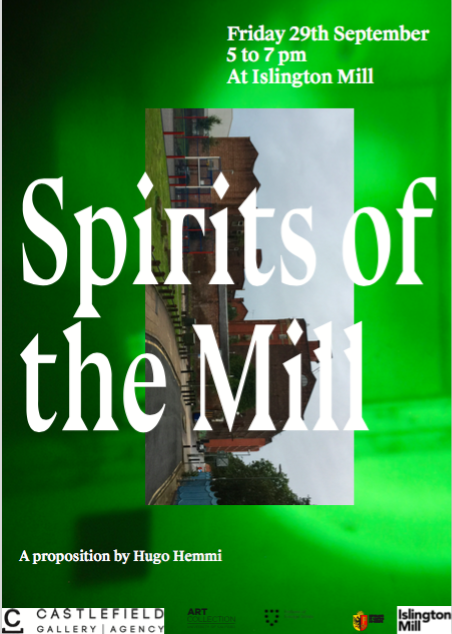 Spirits of the Mill // Exhibition by Hugo Hemmi

Spirits of the Mill is a proposition and exhibition of Hugo Hemmi, a Swiss artist from Geneva.

Hugo Hemmi will present a display of his artistic research inspired by his one month residency at Islington Mill. His residency is in partnership with Castlefield Gallery, Salford University and Islington Mill, Embassy of Foreign Artists (Geneva) and Cultural Office of Geneva State.

Before his arrival in Salford, Hemmi was already interested in investigating the Mill’s history, particularly in locating and interviewing people who worked at Islington Mill since it was built in 1823. Islington Mill was originally one of Manchester and Salford’s famous textile mills, producing cotton fabric.

All of the witnesses of those original factory workers and observers of those times are since gone. The Mill has been now an artistic space and community since the year 2000, but the ‘Spirits’ of the Mill remain.

Given that most of his intended audience were now long dead, Hugo has decided to record ghost stories relating to life around the Mill at its beginnings, performed by various Mill artists. He has asked them to channel the spirit of these previous Mill inhabitants, and to represent the workers of the 19th century.

Hemmi has identified the parallels in the lives of the Mill’s past workers of the 19th and 20th centuries, and the current tenants of Islington Mill, comparing artistic work to the factory work of the textile weavers and spinners. Both Mill inhabitants share the position of being precarious workers on their own, but through shared practice and resources, draw strength from achieving common aims and collaboration.

Opening reception will be 5-7pm on Friday 29 September, free & open to the public.  There will be a limited amount of wine for guests, but please feel free to BYOB.