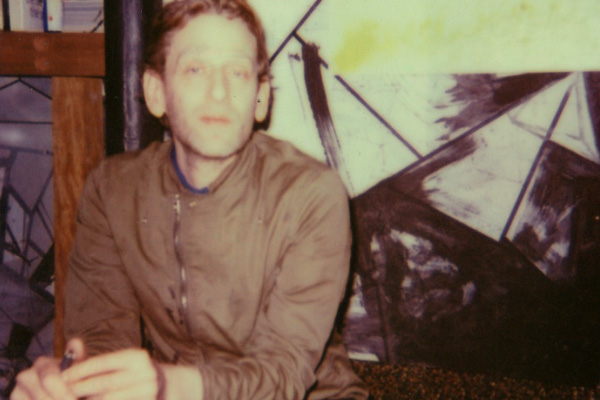 At first look, Neil’s ink drawings – composed of straight lines and angles in complex mathematic relation to one another – prompt the brain to consider possible computerised origins. In fact, each of the lines represents the duration that the artist’s own hand is able to produce a straight line without interruption or fault at each moment of drawing, so what appears as potentially digital in origin is in fact supremely organic.

The bulk of Neil’s self-assembled and constantly-in-progress live/work space at Islington Mill is occupied by the artist’s vast archive of vinyl records and CDs – around 30,000 at the last count. Music provides both the material space (partitions, walls, surfaces, reading and viewing material) and also an aural context for everything Neil produces. From a humongous library of music it is Autechre and Arvo Pärt who provide the most revisited soundtracks, and a recognisable texture in the music of both artists – one that doggedly defies any correlation between ‘minimal’ and ‘simplistic’ – is also there (either by osmosis or intention) in the hypnotic ink and paper tessellations that Neil produces.

In these works, the eye (and the artist) will gladly draw attention to any perceived ruptures in the form, perhaps a point where the process has fallen apart, become unrepeatable or uncontrollable. These areas become a focus of interest, and their unpredictable form might even lead to the development of subsequent pieces. We are familiar with a similar process in biological evolution where the accidental mutation of a gene ultimately enables genetic progress and is therefore responsible for every niche in the natural world being occupied. Neil quotes Buckminster Fuller’s educational treatise ‘Mistake Mystique’ in his active resistance of the notion of artistic ‘mistakes’. In fact it’s the very ruptures in form that allow for the natural contours of learning and development.

Revisiting this idea of a ‘niche’ can be key to understanding Neil’s work. The niche is not just the context in which he lives and works, rather the context has been specifically designed to create the art, and the art is produced as both a response to the context, and to deliberately occupy it, just as the space itself is adapted to the artist – everything from bed-deck to shelf height to proportion of drawing paper is scaled and contoured to the size of the artist’s body. The degree of light in a given area, the time of day, the musical selection, all will find their way into Neil’s work in some form. Due to the intimacy of his production method and the attachment of the work to its environment, the artist isn’t shy in communicating anxiety that works may ultimately have to make their home elsewhere. He is understandably keen that something of the process travels with them, which hopefully this piece of descriptive writing can contribute to.

Perhaps ironically to the outside observer, Neil’s tightly-controlled environment makes possible an artistic practice that is truly liberating. It’s a circumstance that both demonstrates and depends upon the abiding ethos of Islington Mill – that is, the belief in the possibility of a fully integrated creative existence, an attainable and practically sustainable parity of work/art/living. Neil Robbins’ creations attest to those potentials and their successes in marvellously fractured and inviting ways.