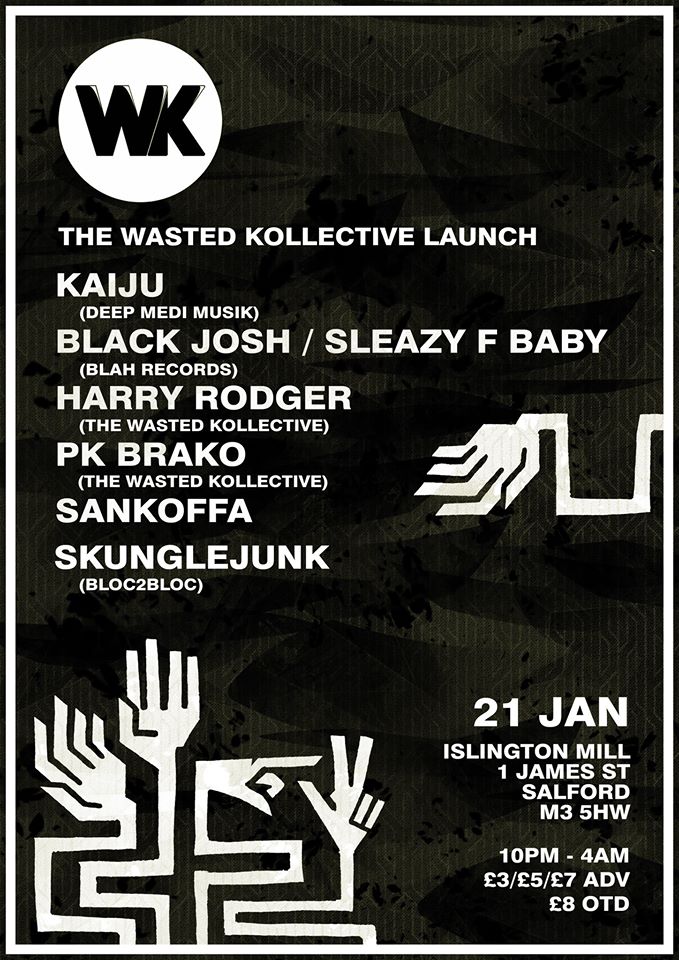 Kaiju (Deep Medi Musik) – “Winners of “Best New Producers” at the 2013 DSF awards, no one is building made-for-system music quite like Kaiju; arguably two of the finest producers in the 140bpm space. Supporting much-lauded (and sold out) releases on Osiris Music, Lioncharge, and Ruffcut, Kaiju have have made a monumental impact on the scene in the short time they have been above ground. Now signed exclusively to the legendary DEEP MEDi MUSIK imprint, things are about to get heavy.”

Black Josh Ape (Blah Records) – “Black Josh, as he’s known to his parents and also non-PC individuals who seek to distinguish him from other Josh’s, started out life in Manchester in a cliche tough estate where people do their washing infront of the house on a spinning umbrella style contraption. He founded the prestigious Ape Cult at a mere 15 years old after standing apart from his peer group while some one else picked numbers. Now also a part of Mancunian super collective Levelz, Black Josh is a force to be reckoned with.”

Sleazy F Hef (Blah Records) – “Sleazy F Baby is a master in the art of b***hes, booze, drugs, money, bit***s, booze, money and drugs. He will destroy any stage you put him on with his intensely hype performance skills and rap anthems. Give him some lean and he’ll freesyle 3 tracks then fall asleep for 12 hours. Job done.”

DJ Sankoffa (Redlight Radio/Mode FM) – Coming all the way from Amsterdam, Netherlands, Sankoffa is arguably the hottest overseas Grime DJ about right now, with his shows on Dam’s Red Light Radio and Mode FM London proving to be very popular on both sides of the North Sea.

PK Brako (NTS/Stella Beats) – Manchester native and CEO of Stella Beats, PK Brako recently moved to London where he has made leaps within the Grime scene, gaining a show on NTS Radio within his first month down there. His track “Poison” ft. Black Josh is definitely set to be one of the Manchester anthems of 2017.

Harry Rodger (Pie Radio/Stella Beats) – Cholo Kingpin Harry Rodger is one of Manchester’s hottest young talents. Also affiliated with Stella Beats, he runs their Manchester show on Pie Radio. With his unique dubplates and playful style he is definitely another to watch for 2017.

SkungleJunk (Bloc2Bloc) – Manchester hero SkungleJunk can be found at various venues around the city skanking his arse off, tearing it up on deck or even toasting pon mic. There’s no party without him

18+ ID will be required on the door