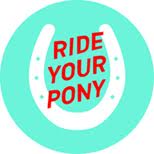 Ride Your Pony is pleased to present to you its inaugural biannual international group exhibition this October at Islington Mill in Salford, UK. 26 participants from across the globe including an array of Designers, Illustrators, Photographers, Artists and Makers have each been invited to create a piece of work to exhibit in response to a lucky dip letter of the alphabet. The brief asked the participants to use their letter which they received in the post as either an object within their work, or as a starting point for them to begin from.

On Thursday 5th of October 5-9pm, the doors will open to the public and invited guests for the exhibition’s launch party where the 26 pieces of work will be on display. A selection of invited participants include: Makers Aliyah Hussain & Mariel Osborn, an Artist and Prop Stylist based at The Engine House at Islington Mill; Andrew Joyce, a UK born Illustrator currently residing in Japan; Ben Jones, a Manchester based Illustrator; Vera Comploj, a New York City based Photographer & Director; Ane Baztarrika, a Pattern & Textile Designer from The Basque Country and Alex Wolkowicz, a Polish / German Photographer and Artist based in New York. To find out more visit www.rideyourpony.club or follow @rideyourpony.club on instagram for regular posts on each of the participants.

More on Ride Your Pony:
Ride Your Pony was set up in 2017 by Multidisciplinary Graphic Artist Marie Jones also known as Kochi Kochi. It will be a nomadic biannual exhibition inviting new and old guests to participate in its exhibitions and events including recent graduates, educators and professionals from within their respective fields. For the weekend following this year’s exhibition, a residency will be held at Islington Mill’s B&B with participants from the exhibition arriving from Europe and the UK. The residency offers the chance for creatives from differing practices to come together and discuss their work and share their learnt skills with one another.
Confirmed workshops include; Orizomenegami, a Japanese art of folding and dying fabrics with Textile Designer Ane Baztarrika from the Basque Country; Sign Language with Laura Parke, a Designer / Educator based in Liverpool; Digital Machine Knitting with Manchester based Marie Jones and more from Manchester based Hilary Judd and Stina Puotinen.