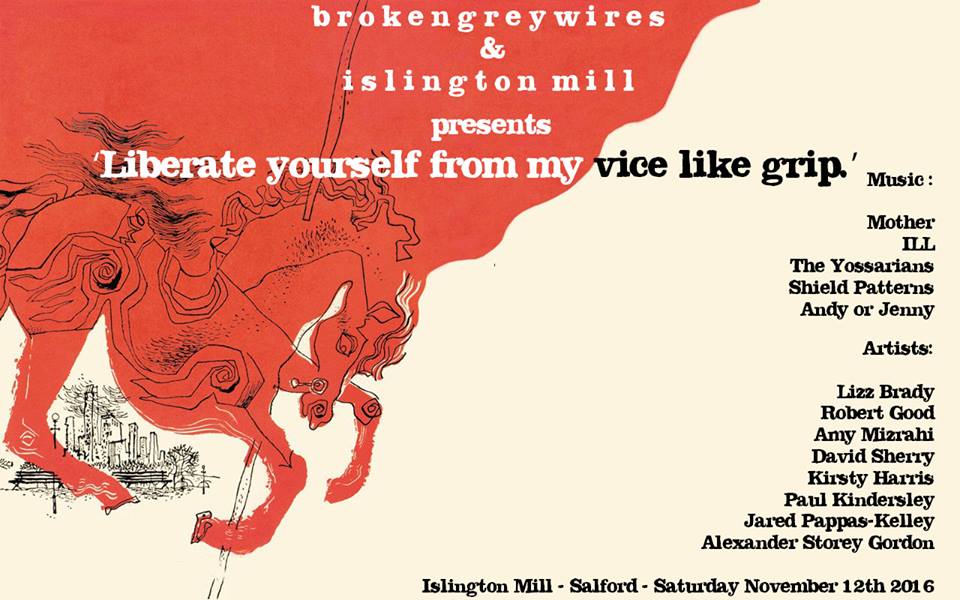 Broken Grey Wires is a contemporary art organisation responding to, and exploring mental health. We also work closely with the community, critically acclaimed artists and major institutions, to open up a dialogue and provide inspiration and opportunities for people with mental health difficulties.

Renowned psychiatrist R.D Laing proclaimed that “Madness need not be all breakdown. It may also be break-through.”

LIZZ BRADY
Brady creates work to mirror the temporary malfunction of her mind which mark her as corrupt and broken.
She strives to create a ‘Cartesian Dualism’, and to challenge the links between physical ‘stuff’ and thinking ‘stuff’; through the building of installations, to form ‘The Moment’ where juxtaposed ideas permeates to fill the empty spaces, in the solid world or within our imagination.

ROBERT GOOD
Robert Good’s work considers the frailties of language and the problems of knowledge. Deconstructing texts, systems and structures, Good blends doubt with a desire for certainty that creates a fault line throughout his work.

DAVID SHERRY
Sherry draws attention both to the ordinary events of everyday life and the intricate structures of the art world, by subtle interventions or absurd exaggerations. Sherry has said he is trying to “expose the systematic processes of day to day life”.

PAUL KINDERSLEY
Kindersley’s multifaceted work is situated in the cultural interface between viewer and film moment. Drawing on camp, nostalgia and the extremities of exploitation movies of the 60s and 70s, his starting references explore the exaggerated filmic concepts and emotions of tragedy, eroticism, melodrama, violence and the tacky.

ALEXANDER STOREY GORDON
Alexander Storey Gordon makes film, text, performances and events that focuses on how the relationship between our bodies, our environment, and others is mediated through film and literature. In his film and written work this is achieved through a rigorous experimentation with the structures, codes, and conventions that govern and channel our reading of experience and the event.

KIRSTY HARRIS
Kirsty Harris’s practice focusses on the spectacle, myth, propaganda and characters within the periphery of nuclear tests. As a multi-disciplinary artist she creates paintings, short films, drawings, audio work and cyanotypes that explore the sinister pageant of man’s attempt at dominance.

JARED PAPPAS-KELLEY
Jared Pappas-Kelley is an artist using sound, video, writing, and installation. Much of his work focuses on ideas of an instability of the art object and the intersection between practice and theory, examining art as a method for understanding the object’s coming together through its undoing.

AMY MIZRAHI
Amys collection of paintings embody themes surrounding gender, identity and mental health. Amy attempts to break boundaries around definitions of beauty and challenge issues regarding self-identity. There are many hidden messages within her paintings, and by deconstructing the human body and pointing out its flaws’ her work becomes complex, humorous and animated.

MOTHER
Entertaining audiences from scenic enclaves in Portmeirion to lo-fi gigs at Salford’s Bunker and house parties in Longsight, Mother are as partial to bare skin and stage props as they are to crafting elegant soundscapes. Their music entwines indie, shoegaze and folk sensibilities while welcoming psychedelic Sun Ra tendencies, adopting an inventive approach to song structures and flows.

ILL
Manchester based 4 piece that will and hurt your brain and scare your boyfriend. Music about pinching your gran’s tranquillisers, Space Dicks and Lizards!

THE YOSSARIANS
Perfectly crafted songs performed with just enough drawl and disjointment for it to be fairly unsettling. The Yossarians are a band that runs alternative to the alternative, respectfully declining the standard and applying their own personal distorted touch to everything they do.
The Yossarians seem to have been gigging in Manchester for a few years now. Their name is synonymous with fun, upbeat psychedelia and folk-rock jives.

SHIELD PATTERNS
Shield Patterns is the Manchester-based duo of Claire Brentnall and Richard Knox (A-Sun Amissa / The Rustle of the Stars / Glissando). Together they create intensely emotive music full of light and shade that’s both melodic and incredibly detailed. It’s a sound that is at once accessible and exploratory and ends up as a triumph of dreamily surreal contemporary music.
The duo’s critically acclaimed debut LP Contour Lines (2014) and subsequent EP Violet (2015) were both released via Richard’s own Gizeh label with new album Mirror Breathing released in September 2016.
During Shield Patterns’ relatively short life-span they have been remixed by alt-j and Dutch Uncles, invited by post-metal titans Cult of Luna to perform at their Beyond the Redshift festival in London, appeared at Wave-Gotik-Treffen in Leipzig, Germany (the biggest Gothic festival in Europe) alongside touring and playing shows with the likes of; James Holden, Portico, Olöf Arnalds, Woman’s Hour, Bernard + Edith and Conquering Animal Sound. March 2015 saw the duo take to the road in support of the Contour Lines album playing in seven different countries along the way.