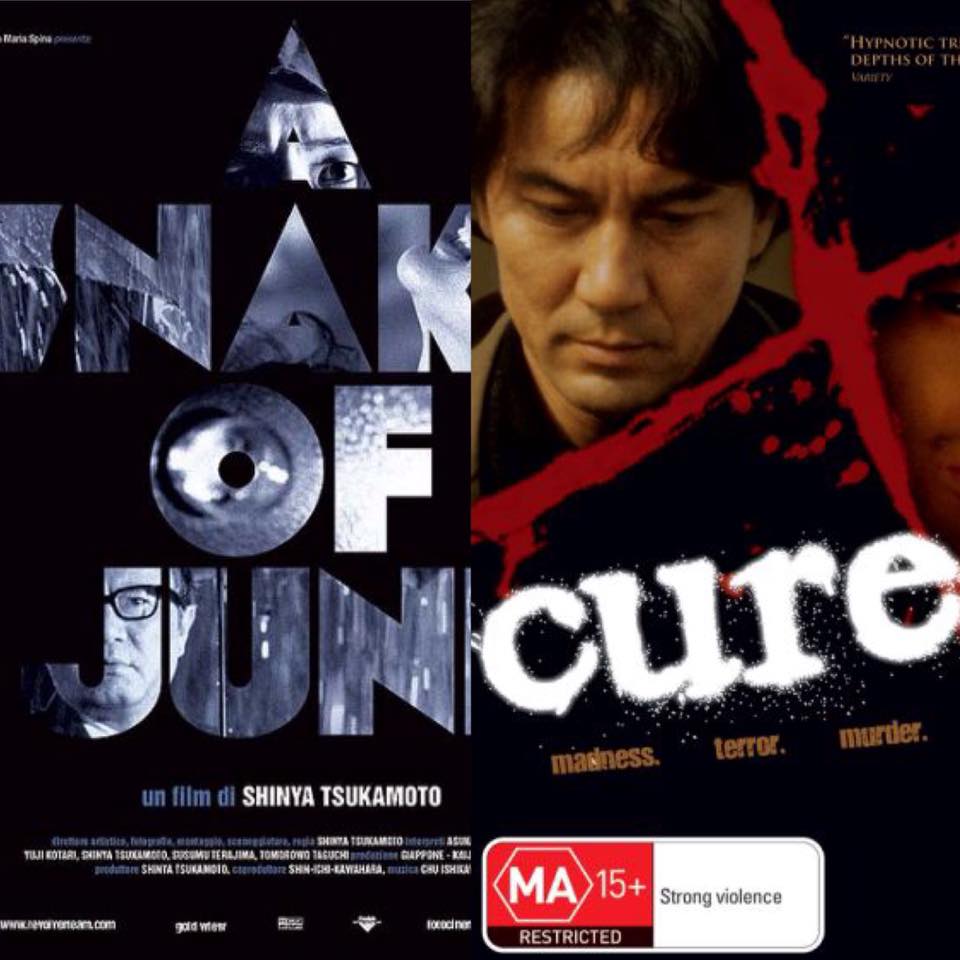 A double bill by two of contemporary Japan’s cinematic masters, Cure (1997, dir: Kioyshi Kurosawa) and A Snake of June (2002, dir: Shinya Tsukamoto) offer a searing and critical look at life in Japanese society, the isolation of living in a metropolis and the deep repression of desire.

Cure launched director Kiyoshi Kurosawa to international recognition during its run of the festival circuit in 1997. Known in his native land as a master of the psychological horror, Cure is a cold, clinical reinvention of the serial-killer sub-genre, shot with slow burning intensity of Andrei Tarkovsky and has had many that have fell under it spell, myself included, declare it as the best horror film ever created.

A wave of seemingly random and gruesome murders is sweeping Tokyo. The only connection is a bloody X carved into the neck of each of the victims, severing the carotid artery. In each case, the murderer is found near the victim and remembers nothing of the crime. Detective Takabe, played by the amazing Koji Yakusho, and psychologist Sakuma are called to try to reveal the connection between these murders, but their investigation leads nowhere. An odd young man is arrested near the scene of the latest murder, who has a strange effect on everyone who comes into contact with him. Detective Takabe starts a series of interrogations to determine the man’s connection with the killings.

A Snake Of June (2002, dir: Shinya Tsukamoto) marks a stylistic shift for director Shinya Tskuamoto, infamous for the cult Testsuo films and his hyper-kinetic crime films Bullet Ballet and Tokyo Fist. Shot in a gorgeous and highly stylised blue mono-chrome, A Snake of June is deals with sexual repression and eventual liberation of its protagonist Rinko (Asuka Kurosawa), a bored housewife trapped in a sexless marriage with her obsessive compulsive husband, who begins to be tormented and stalked by a deranged and emotionally unstable predator, played by the director, who forces her to confront her inner sexual desires. Melding the surreal and absurd with the mundane, but without the overtly kitsch and crass elements of noted influence David Lynch, Tsukamoto’s rain soaked, neo-noir drama is blurs the lines between fantasy and obsession and contains some of the most memorable set pieces in contemporary Japanese cinema for one it’s most celebrated and instantly recognisable auteurs.

As always, Food and drinks from 6.30, bring your own anything!

Films commence around 7.30 as it’s a double.

FREE. OPEN TO ALL.

We host food from 6pm & the evening’s event will start from 7:30pm or as announced.