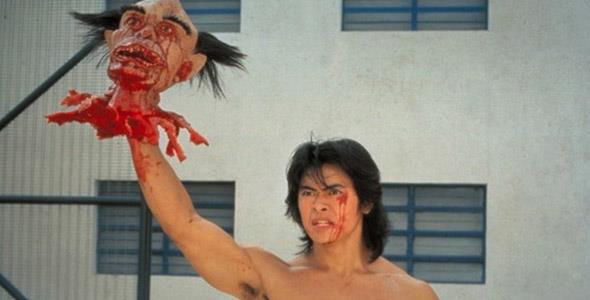 IT’S THE MOST, WONDERFUL TIME OF THE YEAR.

A few of us all came to the same conclusion on 16 independently, and that just happened to be Riki – Oh.

No list of outrageous foreign movies is ever complete without this Manga adaptation, the first non-erotic Hong Kong movie to receive a Category III (Adults Only) rating. Ricky is cartoonishly excessive, with enough crushed heads, severed limbs, gouged-out eyeballs and exploding bodies for two movies.

It’s the not-too-distant-future – well, 2001 – and prisons are run as for-profit (PROPHECY??) franchises by corrupt wardens that grow opium poppies on the grounds, use the inmates as cheap labour and terminate with extreme prejudice anyone who stands in their way. Business is a-boomin’ until the arrival of Riki-Oh, a seemingly indestructible martial artist who can tear off jaws, gouge out eyes, hack off limbs and punch holes through his opponents.

This makes Riki-Oh a fly in the ointment, so the warden hires an army of thugs to torture him. One of these fellas is so tough that, rather than admit defeat, he disembowels himself and starts strangling Ricky with his intestines.

OPEN TO ALL ALWAYS FREE