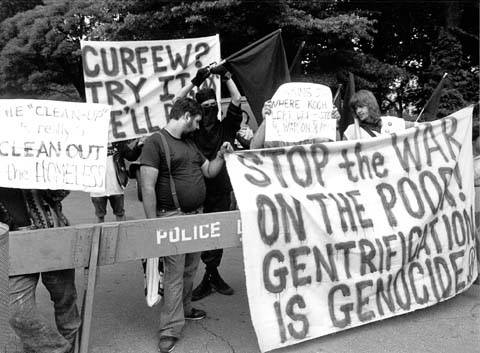 This week’s edition of Islington Mill Pot Luck Film Night (IMPLFN), we will be taking donations for local Manchester and Salford homeless charities. Clothing, food or money are all welcome.

Drawing parallels with the current explosion in homelessness and disregarding actions from governments and councils, CAPTURED documents the thriving alternative culture around New York’s Lower East Side, and the eventual violent destruction of the homeless ‘Tent City’ in Tompkins Square Park.

Captured,” a dynamic and captivating documentary by Ben Solomon and Dan Levin, is a dual portrait of a neighborhood, the Lower East Side of Manhattan, and the man obsessed with documenting its history, Clayton Patterson. “You could be anyone you wanted on the Lower East Side,” explains Patterson, talking about the pull of the neighborhood in the 1980s as a place where people came to explore alternative identities: skinhead, gay, artist, junkie.

Patterson, a fearless photographer and videographer, is happiest photographing in highly dangerous situations: drug deals, mosh pits, riots. “This is a revolutionary tool. Little Brother is watching Big Brother,” he says of the camcorder, referring to its usefulness as a legal and documentary tool for ordinary people.

Much of the film takes on an elegiac tone, as it emphasizes the way that relentless building of new luxury high-rise buildings is destroying the character of the neighborhood as a haven for personal experimentation.

Patterson extensively documented the backstage glamor of the vibrant drag performance scene of the Pyramid Club, and, even more astonishingly, the close and peaceful coexistence of the gays with the macho skinheads, who served as Security for the club.

The film’s climax is the police-instigated riot of August 6th, 1988, in which the tent city of homeless people in Tompkins Square Park was attacked. A night-long battle ensued, with the cops actually finally retreating in defeat. The tapes provide graphic evidence of the completely out of control actions of the cops.

Patterson was famously jailed and went on a hunger strike, because of his refusal to turn his tapes over to the City. (He eventually came to an agreement with them, whereby he provided them with copies of the tapes.) His tapes resulted in numerous cops being fired and disciplined for their actions, something that almost certainly would never have occurred without the crucial evidence he had held on to.

Patterson was arrested 13 times in the chaos that ensued for the rest of the summer, as the tent city was dismantled, amidst constant confrontations.