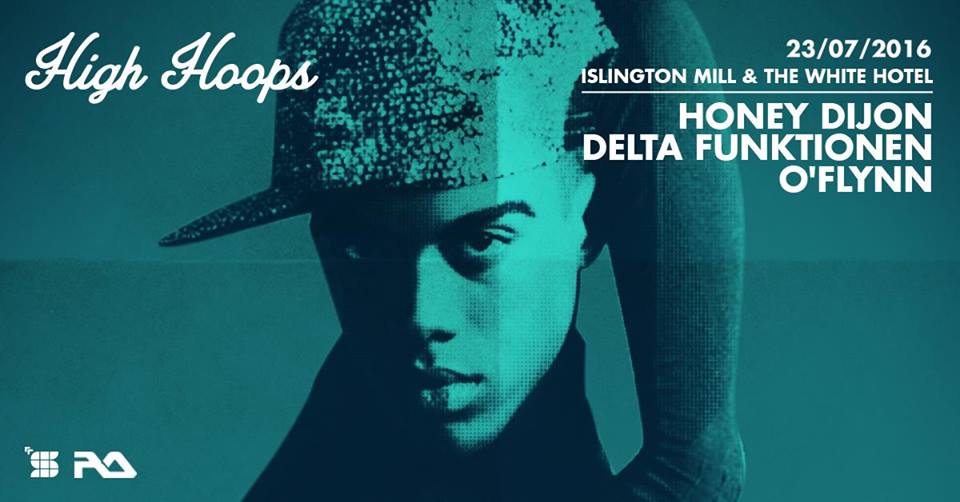 High Hoops are back at Islington Mill from 4pm on Saturday the 23rd of July to bring in their birthday celebrations with Honey Dijon, O’Flynn and friends.

Honey Dijon was born and raised in Chicago – the home of house music. It was while hanging out in Chicago record stores where Honey met and formed a long lasting friendship with Derrick Carter, who became a mentor. It was he who introduced her to the underground of Chicago where she was exposed to the sounds of house and Detroit techno. Still preferring vinyl as a format, there is something hugely authentic about the way Honey mixes, fusing the bump of Chicago with more classic New York sounds and other European influences.

Delta Funktionen spins a genre-defiant blend of Detroit techno, Chicaga house, old school electro and Italo disco and has been a regular at clubs like Fabric, Trouw and Berghain/Panorama Bar. This man will be taking over our after hours party in the White Hotel alongside some of Manchester’s finest.

One of the standout productions of 2015 came from another of our day party guests. O’Flynn, a young producer who inaugurated a new imprint with tracks of percussive and powerful, African-influenced house music. ‘Tyrion’ became a tool for Four Tet that was rarely left out of his sets, while the anthemic ‘Desmond’s Empire’ won support from Gilles Peterson and was used to devastating effect across festivals in the summer.

Tickets are already starting to go – you can grab yours here skiddle.com/e/12693079

We will then be heading across the road to the White Hotel for an after hours special event with Delta Funktionen and friends which will go on until 8am!