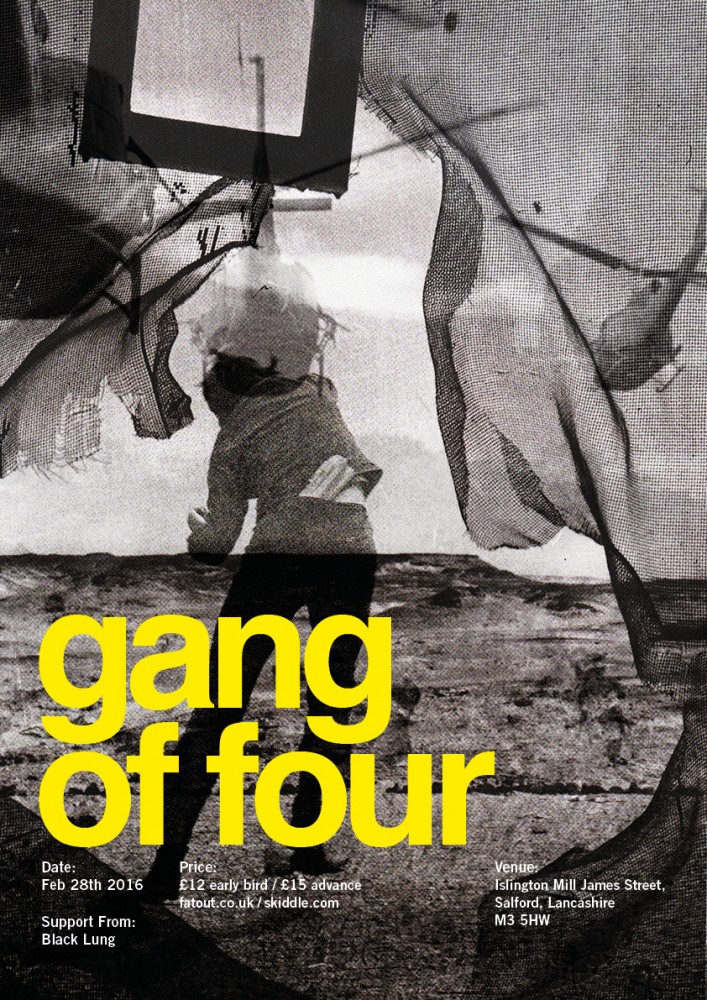 Fat Out are very pleased (again!) to announce Gang of Four will play the Burrow on 28th Feb.

This show is rescheduled from last year. Original tickets have been refunded.
Long time coming for Fat Out and very pleased that we can reschedule after having to cancel previously (due to illnes) and we are more than excited to finally be able to re-announce this show!

GANG OF FOUR
Gang of Four are an English post-punk group, formed in 1977 in Leeds. The band plays a stripped-down mix of punk rock, funk and dub, with an emphasis on the social and political ills of society. Gang of Four are widely considered one of the leading bands of the late 1970s/early 1980s post-punk movement. Their later albums (Songs of the Free and Hard) found them softening some of their more jarring qualities, and drifting towards dance-punk and disco. Their debut album, Entertainment!, ranked at Number 483 in Rolling Stone’s 500 Greatest Albums of All Time, and is listed by Pitchfork Media as the 8th best album of the 1970s.David Fricke of Rolling Stonedescribed Gang of Four as “probably the best politically motivated band in rock & roll.

Gang of Four’s music brought together an eclectic array of influences, ranging from the neo-Marxist Frankfurt School of social criticism to the increasingly clear trans-Atlantic punk consensus.
The Gang’s debut single, “Damaged Goods” backed with “(Love Like) Anthrax” and “Armalite Rifle”, was recorded in June 1978 and released on 10 December 1978, on Edinburgh’s Fast Product label. It was produced by the Gang of Four and Bob Last and Tim Inman. This led to two Peel radio sessions, which, with their incendiary live performances, propelled the band to international attention and sold-out shows across Europe and North America. They were then signed by EMI records. The group’s debut single with this label, “At Home He’s a Tourist”, charted in 1979. “, was banned by the BBC during the Falklands War in 1982.