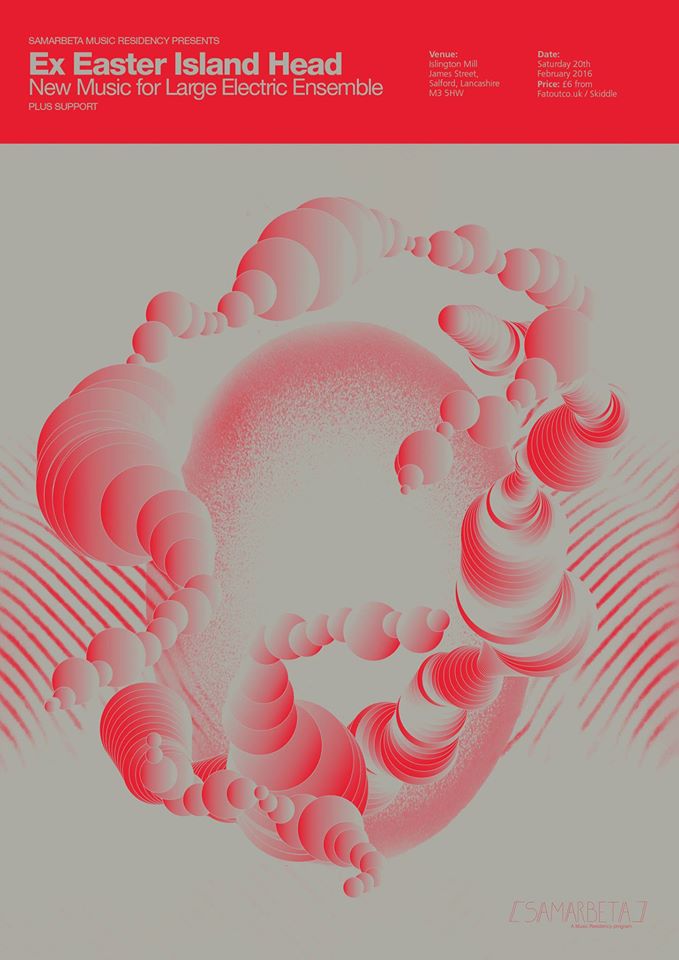 Ex Easter Island Head return to Samarbeta following the success of their initial residency with the BBC Philharmonic ensemble in April/May of 2015 which resulted in the group preparing a brand new composition and performing it alongside a BBC Philharmonic Ensemble at Sounds From the Other City festival 2015.

EEIH are a Liverpool based trio composing and performing music for solid-body electric guitar, percussion and other instruments. Incorporating multiple prepared electric guitars struck with percussion mallets and treated as an infinitely variable sound-source as well as drawing on an arsenal of cymbals, bells and acoustic percussion, Ex-Easter Island Head devise works that explore group interplay, repetition and melodic invention through purposefully limited means.

As part of this Samarbeta residency the group will spend 2 weeks at Islington Mill to develop the Large Electric Ensemble, Manchester. The group have previously done a similar project with musicians from Nottingham (https://lowpoint.bandcamp.com/album/large-electric-ensemble).

EEIH will work with a handpicked selection of local guitarists from a variety
of musical backgrounds to compose a new piece that will see the groups’ unique vocabulary of extended techniques deployed on a mass scale. Drawing influence from the ensemble-wide tunings of gamelan, change-ringing patterns, and the harmonic possibilities afforded by massed amplified strings, EEIH seek to create an ambitious, long form work for multiple prepared guitars, basses, and percussion.

The intended outcome of the residency will be the creation, performance and recording of an ambitious new piece of music, breaking new compositional ground for the group.

Join us at Islington Mill on the 20th February to witness this debut performance alongside a specially curated support line up made from contributors to the ensemble.