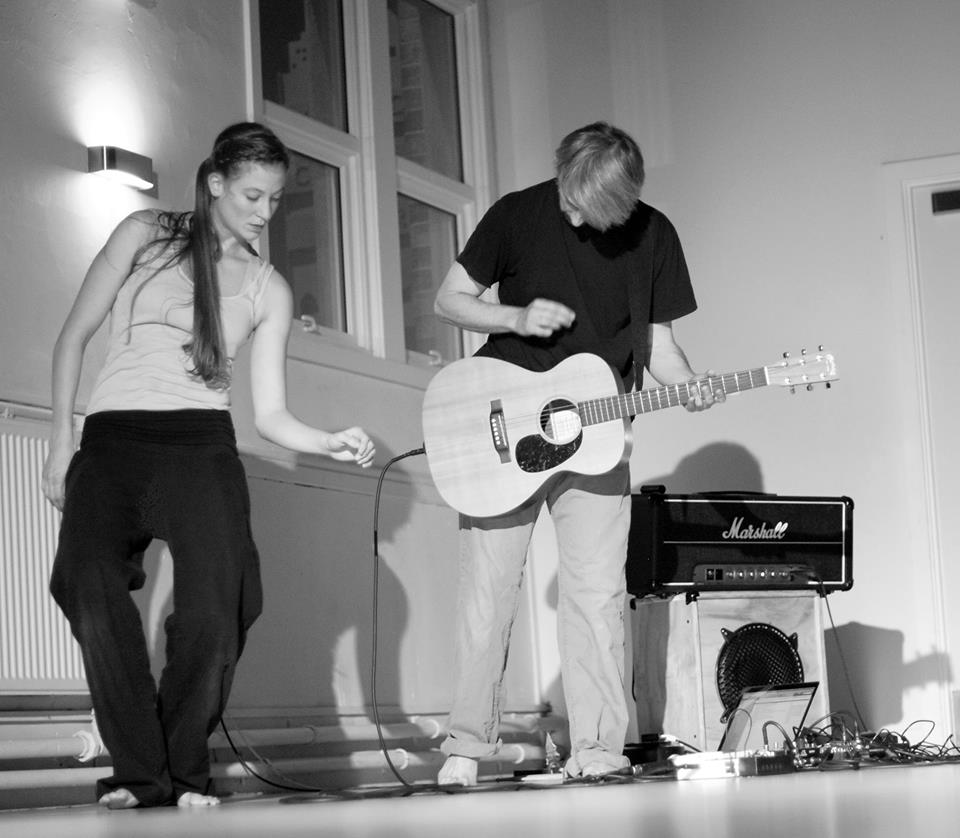 Collective Endeavours workshop:
You will explored many aspects of improvised music / dance. The music and the body exists with an equal weight. To make a single event. We explored the physicality of sound and the music inherent in movement. What is similar and what is different make an endless dialogue.
Collective Endeavours Live Performance:

Collective Endeavours started with the meeting of Jer and Solène in 2010. Their collaboration is based in their joint desire to explore each other’s art form and to have the music and dance create an equal impact. They have created set pieces (Cairngorm Snow and Fracking) as well as improvised performances (Around Titles). They have performed them in a wide range of contexts, to all kind of audiences around the UK and Europe. In the last 2 years Jer and Solène have been playing with a larger group of dance/music performers and were recently part of the Glasgow Improviser Orchestra festival at the CCA in Glasgow.

Solène’s dance journey started on her kitchen floor and took her to London Contemporary Dance School where she graduated with a BA(hons) and an MA. In 2007 Solène joined Scottish Dance Theatre. As a freelance dancer for the past 4 years she has worked with Lost Dog, Gecko, Troubleyn, Vera Tussing dance and Joan Cleville Dance. In parallel Solène co-created Creative Endeavours with Jer Reid in Glasgow.

Jer plays music in lots of different configurations including The Bravest Boat (with Stevie Jones, Aby Vulliamy and George Murray) and sumshapes. He improvises a lot in music with people like Fritz Welch, Caroline Kraabel, Luke Sutherland, Stu Brown, Catriona McKay and with the Glasgow Improvisers Orchestra and for the past 6 or so years he has played a lot with dance (both composed and improvised) with people like Rosalind Masson, Annie Lok, Curious Seed, Kirstie Simson, and many other great people at his residencies at the CCA and The Work Room that focus on dance/music improvisation – of which he is pretty evangelical.