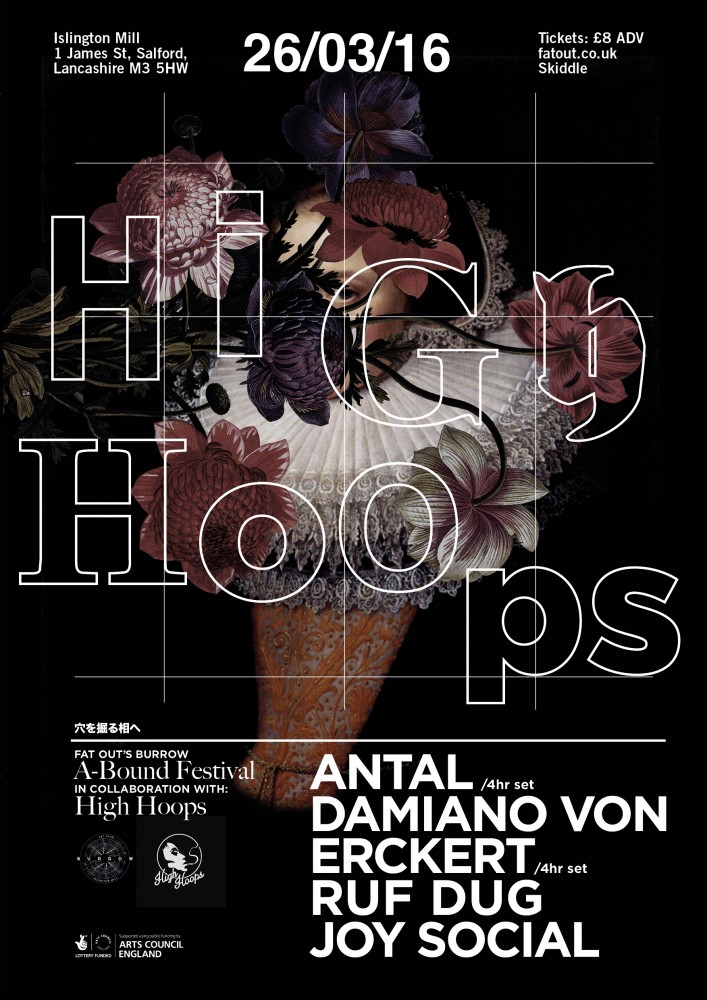 High Hoops are up and coming promoter based between Manchester and London. They focus on house and techno music working hard to make their events high calibre and visually stimulating. Previous bookings include Marcellus Pittman, Cinthie, Amir Alexander and DJ Sprinkles

Preferring not to put a name to his style, the most he’ll concede is that his music is about a diversity that feels soulful, raw & spiritual.

Over the past twelve years Rush Hour has cultivated itself into an institute for electronic music and a haven for music lovers worldwide. The reputation Rush Hour has built mainly comes from the fact that Rush Hour first and foremost focuses on music they totally believe in and have a love for.

Over the last few years the label has grown stronger than ever, with classic releases by locals such as Aardvarck, Comtron, Kid Sublime, Rednose Distrikt, San Proper & Tom Trago as well as releases by international artists such as Anthony ‘Shake’ Shakir, Carl Craig, Daniel Wang, Kenny Larkin, Nebraska, Recloose, Rick Wilhite and Virgo Four. The label is also known for hosting compilations, such as Beat Dimensions compiled by Cinnaman and Jay Scarlett or Gene Hunt’s Chicago Dance Tracks.

Damiano von Erckert
Hailing from Germanys largest urban agglomeration, the Ruhrgebiet district, Damiano von Erckert represents a growing breed of artists not bound by genre specific constraints. Raised near by and now residing in Cologne, his broad interest in a variety of musical spheres started young, growing up under the wing of his father, also a DJ, allowing him to accumulate a varied taste in Soul, Hip Hop, Funk, Afro and Disco, emulating the likes of Willie Hutch, Donny Hathaway, Fela Kuti and Ron Hardy.

Ruf Dug is a charismatic old school talent who makes raw records that rely on great sampling and a keen understanding of dance floor dynamics. Aimed squarely at the club, they come not only on labels like Popular People’s Front and Unknown To The Unknown, but also Ruffy’s own limited Ruf Kutz imprint. Often selling out soon after release, previous Ruf Kutz releases now fetch high prices on Discogs and continue to do damage, unlike most disposable club fodder.

Based in Manchester and a former Red Bull Music Academy participant, Ruf Dug is a fierce and fiery DJ who regularly appears on NTS radio as a guest of the likes of Hessle Audio and Bradley Zero and his jams get played by Ben UFO, Moodymann, Craig Richards, Erol Alkan and many other tastemakers the world over.
In short, there’s no holding back this precocious talent.