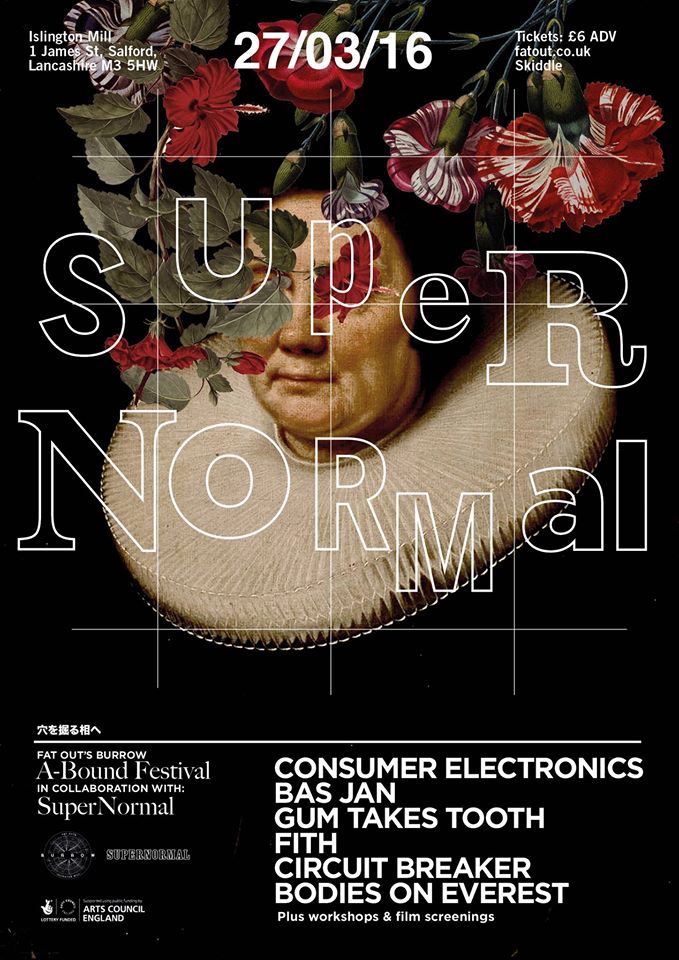 A collaboration between Fat Out and Supernormal ; a three-day, experimental arts and music festival taking place at Braziers Park in Oxfordshire.

Philip Best’s on/off moniker Consumer Electronics, currently touring as a band, has been touted with ‘power electronic’ genre he’s pioneered since 1982 at the ripe age of 14. Regardless of eschewing that confined label – which he considers a usually disappointing experience measured against its potential – his performances guarantee the most extreme, both at the outer most existence of confrontational subject matter and noise experimentation; a purity of vision where the concept of offense and obnoxiousness is rejected as a social construct. Certainly no exception is teasingly contrarily titled latest album Dollhouse Songs currently being toured.

Bas Jan is a new project with acclaimed singer and multi-instrumentalist Serafina Steer (here on bassguitar, keyboard, and vocals) joined by Sarah Anderson (electric violin, keyboards, and vocals) and Jenny Moore (drums and vocals). Their debut single ‘Sat Nav’ gives a glimpse of the direction this exciting band are taking with a woozy journey that drives the listener from a city-sensible pop to a shimmering forest steeped in multi-layered synths and soaring guitar solos.

Gum Takes Tooth are a two man everything machine endlessly seeking what-the-fuck aural mesmerism in a maze like arrangement of physically overwhelming rituals of sound system culture, riffs and pan-cultural psychedelics. Each member focusing intently on unmediated rhythmic interaction between crowd and performer, directing the energy towards unexplored altered states. Dark primal frequencies are felt and not heard, unremitting circular drums shatter and rebirth whilst a cast of vocal characters provide an astral guide through these dizzying manipulations.

Circuit Breaker have spent their existence in the hinterlands of the obscure, sourcing their sound from homemade and bastardised electronics and an animalistic hunger for degenerate rhythms, working in near total isolation with neither a care nor concern for anything resembling peers.

Heavy as fuck and with feet firmly on distortion pedals, Bodies On Everest is made up of two bass guitarists and a drummer from Manchester/Liverpool. Atmospheric and haunting, the trio lead a howling, unrelenting assault before abandoning you in the deafening silence of thumping groove.