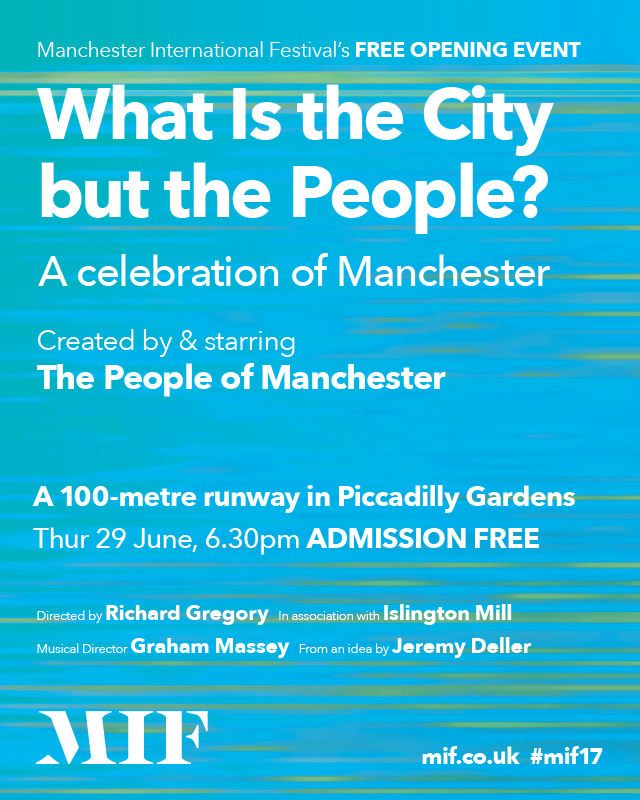 What is the City But the People? Islington Mill at MIF 2017

With now exactly two weeks to go until Manchester International Festival, unveil their 2017 opening event ‘What Is the City but the People?’ at Piccadilly Gardens on Thursday June 29th , we are really excited to announce news of two new artist-in- residence commissions that have been developing as part of our on-going collaboration with the project.

Kochi Kochi aka Marie Jones of Studio 202 at Islington Mill is exploring typography through textiles and small paper sculptures. Typeface design has adapted in line with advancements in technology. With this in mind, Marie has been hacking her knitting machine, a brother kh950i, to explore the ways in which the machine’s language translates letterforms both digitally and in knit form to generate it’s own typeface designs.

After working closely with the creative team and participants as part of ‘What is The City but the People’, body language and our behaviour in social situations has also directly influenced Marie’s residency. Marie believes that through applying participants personalities to the font design of small typographic paper sculptures, she will be able to capture a visual representation of their character. This in turn will strengthen an individual’s voice by not only communicating their message but a part of their personality too, a multi-sensory approach to type design exploring how we can strengthen our methods of communication.

> thread { } is a new collaboration that brings together Mill residents Cheryl O’Meara, a print designer whose ambition is to push the paradigms and boundaries of fashion and print and to reinvent a new future for fashion and self-expression, and Sally Gilford who is a print maker and creative practitioner and is currently creating innovative textile based work with scientists from the Wellcome Trust Centre for Cell Matrix Research. Completing the trio is Vicky Clarke, a sound and digital artist whose practice explores sound and sculpture, space and perception and manifests in installations and public performances.

As part of the project, participants in the Festival’s opening event will be given a unique opportunity to express their place in the city to create a portrait of their identity through visual pattern, bio data and textile design via a combination of digital and analogue processes.

A selection of the digital and analogue material will be interpreted into a collaborative design, which will reflect and act as a metaphor for the repetitive and perennial themes of personal human experience.

Both residencies will develop throughout, during and after the main event on Jun 29th , with an exhibition planned for later in the year at Islington Mill.

Keep up with Marie’s residency on her instagram posts @kochi__kochi